In a bunch of middle age houses, the ruins of a double colonnade of the time of Augustus house the Church of S.Angelo in Pescheria.

The upper part of this theatre built by Augustus houses palace Orsini and is sided by the three columns of the Apollo Sosiano temple.

The roman Sinagoghe, built in the old place of the Five Schools destroyed by the demolition at the end of the XIX century, is in Babylonian style, as a memory of the hebrew captivity in Babilon and its big dome stands out the roman skyline.
The Museum houses significant memories of the roman Hebrews.

Natural ford of Tiber,  this Island is linked to the banks with two roman bridges:  Cestio and Fabricio, both from the I century b.C.
Sacred to Esculapio, in imperial ages it housed an hospital and also today houses the Ospedale Fatebenefratelli and  the Ospedale Israelitico.
The Church of S. Bartolomeo “de insula”, built by Ottone III in 1083, was restored in baroque style. 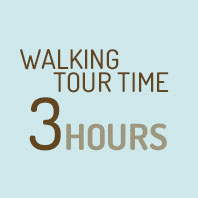 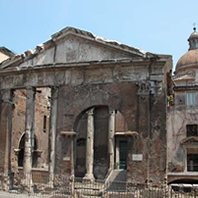 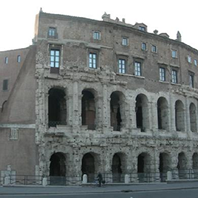 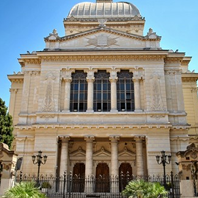 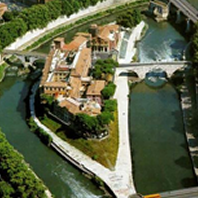