Built in the IV century, destroyed by the Normands and rebuild into the very same place, this church is in three levels: Romanic, Paleochristian and Roman .
Among its masterpieces, the frescos of Masolino da Panicale and Masaccio in the Branda Chapel, the beautiful mosaic in the apse and the frescos in the paleochristian basilica with the first examples of Volgare, the language which marks the passage from Latin to Italian.

In the cellar of the church we can found a Mitreo, one of the many temple dedicated to the god Mitra in Rome.
The secrecy of the rite and its mystery are stressed by the peculiar undergrounded atmosphere.
A long path of steps leads to the roman district, and you can walk through store rooms of warehouses with the floor in spicatum, narrow roman streets and other rooms built into the 70 A.D.

The church was built  on the roman house of the two martyrs and on other three different buildings, all decorated with well preserved and colourful frescos.
The monastery is dominated by one of the most beautiful Romanic tower bell from the XII century.
The original church was restored in the 1715 by A.Canevari e A.Garagni. 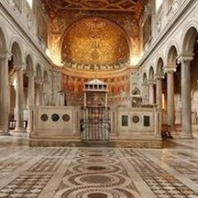 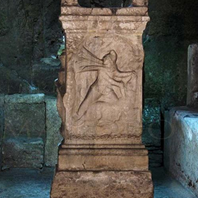 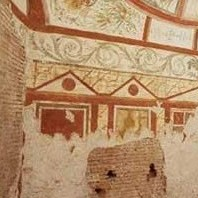